The following photo sequence is of East Beach at Port Fairy Victoria. The first sand fence was installed in November 2013 with the second in March 2014. The dune face was profiled, clad with jute mat and planted. The reference point in all images is Survey post 5. No sand has been transported by mechanical means to achieve this result.

Above. Installing the second fence after the first fence had acccreted a full load of sand.. Both 1.2m Beachmaster sand fences were installed at a point below the minimum beach level.

Above. November 2015. The dune toe has re-established after the storm erosion of June 2014

Above. November 2018. The beach and dune have fully recovered.

If exposed again by storm erosion, the sand fence will once again begin its defensive roll.

The site of a disused town nightsoil dump was threatened by the erosion of the dune for many years. Substantial eolian sand accretion occurs during the summer months only to be stripped away during winter storms. The erosion rate has been greater than the accretion rate,resulting in a receding dune which threatened to expose the old dump site.

Beachmaster® sand fence was selected to aid in the accretion and retention of sand accreted during the summer months and defend the sand account during the winter storms.

The origional fence, the top of which is visible between the toe of the the dune and the new fence was installed in November 2013. It was quickly buried to full depth by eolian deposits and it was decided to install a second fence before the winter to double the systems defensive capability.

The beach was excavated to its MEL (minimum eroded level) to install the second fence in late March 2014. The system consists of 2 x 200m 1.2m high Beachmaster® sand fences. 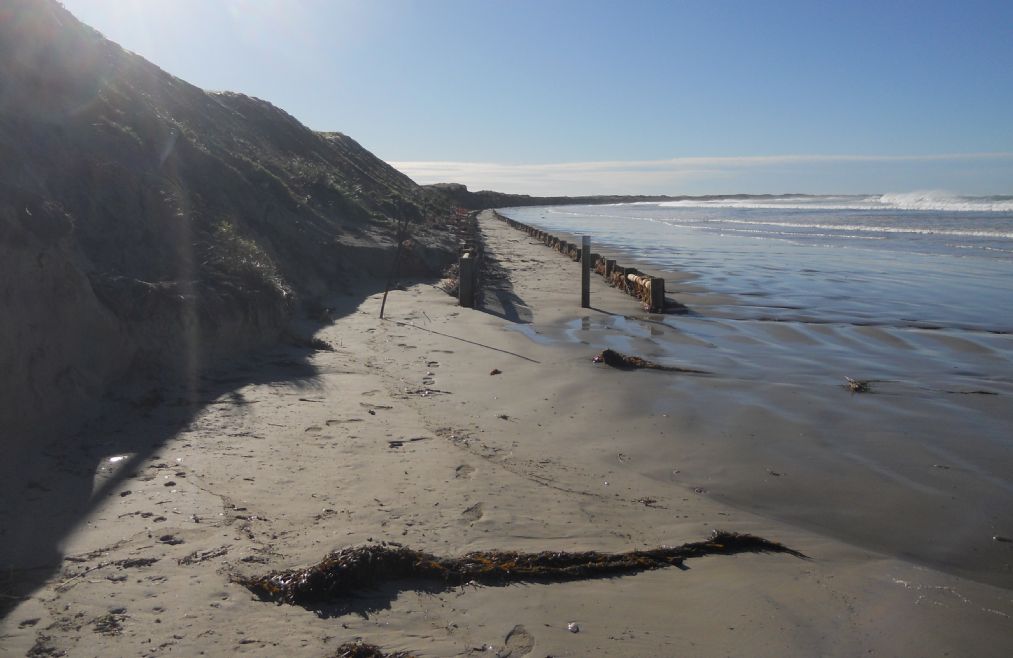 The above image and the video below, taken 3 days after the storm show the toe of the dune and dune face behind the sand fence still intact.

Beach levels in the areas of untreated beach are substantially lower with sand being eroded from the upper beach and the dune face. Waves are advancing unimpeded to the toe of the eroded dune .

The video below shows the wave travelling right to the dune toe except in the area where the Beachmaster® sand fence has been installed.